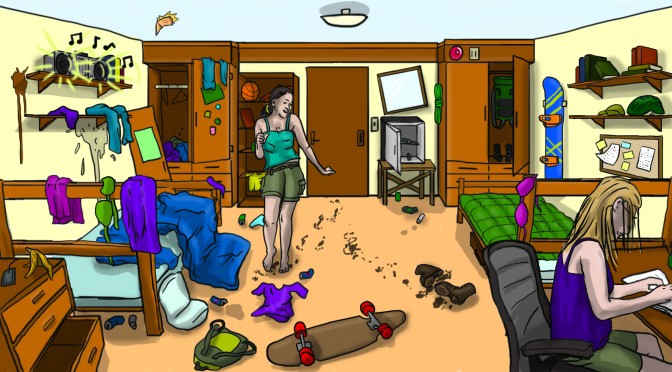 For many freshmen moving into the dorms, it’s their first time living in a 10’x15’ box with another person and away from the comforts of home. The key to cohabitation in such a small space is to follow the rules, which don’t always come naturally. Here’s a rundown so you can avoid killing yourself and/or your roommate.

Don’t: Avoid your roommate when conflict arises.
Do: Communicate your distress when he or she uses the last of your zit cream.

Don’t: Pretend that your parents will magically appear to pick up after you.
Do: Clean up after yourself—you’re an adult now.

Don’t: Practice poor hygiene and a lack of self-awareness.
Do: Shower, brush your teeth, and use deodorant.

Don’t: Be too loud late at night—there are people trying to succeed in college.
Do: Turn your music and TV off or use headphones during late night and early-morning hours.

Don’t: Chunder in your room after a long night of drinking.
Do: Make it to the bathroom to offer up your dinner to the porcelain gods.

Don’t: Wear the same clothes every day without washing.
Do: Find out where the washer and drier are located and use them.

Don’t: Bring someone home unannounced and expect to have the place to yourself.
Do: Create some ground rules for shacking up if the opportunity presents itself.

Don’t: Act like you own the place.
Do: Be thankful for the opportunity to get an education.

Don’t: Help yourself to your roommate’s food or booze without permission
Do: Share your food and booze. Sharing is caring.

Don’t: Make up stories about your awesome exploits in order to seem cooler.
Do: Be yourself. You’ll have plenty of new exploits soon.

Don’t: Assume everyone is doing as well as you with being away from home.
Do: Try to support those who are struggling and they’ll return the favor.

Don’t: Rappel out the windows in Roski—no matter how cool it seems.
Do: Rappel off some badass rock and ice climbs in Hyalite instead.